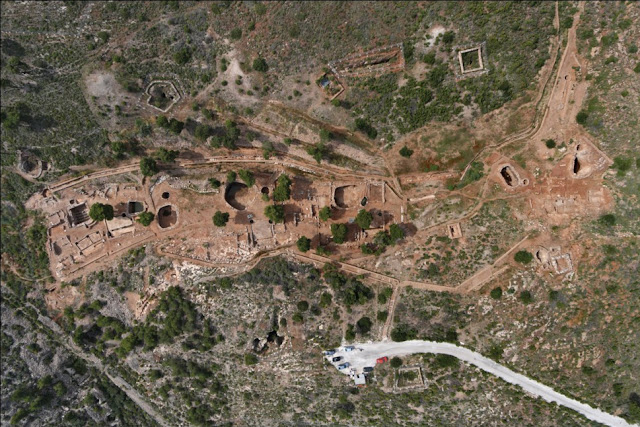 When the allied Greek cities found themselves facing the invading Persian Army in 480 BC, it was an existential battle between East and West. Greece, representing all the values of the West, as we know it today, used its “wooden walls” – its ships – to face the Eastern invaders.

Many historians have dealt with the “what if” question: What would the history of humanity have looked like if the outcome of the Battle of Salamis had been different. However, history is not written with “what ifs.”

The priestess Aristonike, with her famous second oracle, pointed to the solution for the Athenians: According to Herodotus, she said, “The wooden wall will be a salvation for you and your children, it will remain impregnable.” It took Themistocles’ bright mind, however, to convince the Athenians that the “wooden wall” did not refer to the old Acropolis fortification, but their fleet.

At the time of the Battle of Salamis, democracy in Athens was less than 30 years old. A Persian victory would have had an immense cultural effect both in the West and around the world. It would have changed the course of history significantly.

To write this significant page in Greek history, more was needed than the self-abnegation of the participants and Themistocles’ brilliance. And that was luck.

One significant variable that proved decisive for the Greeks, defenders of the West against the Persians, was the discovery in 483 BC of a significant deposit of silver in Maroneia (today Kamariza, west of the town of Lavrio). Themistocles, through his “Naval Law,” convinced the Athenians to give up their share of the silver found (10 drachmas each, about half a month’s wages for a craftsman) to fund the construction of 200 triremes for a “national cause.” The 200 triremes were among the 378 fielded by all Greeks taking part in the Salamis naval battle.

Without this “silver vein,” nothing would have been the same in this Athenian “Golden Age.” With the money from the Lavrio mines, Athens was saved.

Read more »
Posted by Kali Ellada at 4:13 PM No comments: 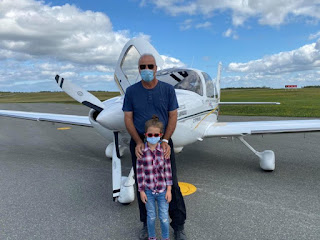 Dimitri Neonakis, a Greek-Canadian from Messinia who lives and works in Nova Scotia, Canada, impresses all in the local community with his inspiring way of expressing his solidarity with his fellow citizens — especially the younger ones.

Following the terrorist attacks of April, 2020 in Nova Scotia, where 22 people tragically lost their lives, Neonakis wanted to find a unique way to express his solidarity with his community.

So he decided to begin creating figures in the sky with his airplane as a way to transmit symbols and messages of solidarity in the air. After these routes are depicted on a map, they show what he says are uplifting images of hope.

Following this unusual gesture, Neonakis decided to take a further step and introduce the "Dream Wings" initiative, which gives children with mobility issues and serious health conditions the opportunity to take a once-in-a-lifetime ride on his plane.

At 86 years old, Giorgos Hatziparaskos is one of the last bakers in Greece making phyllo pastry by hand. With the help of his wife and son, he keeps the business going thanks to tourists visiting the Greek island of Crete. 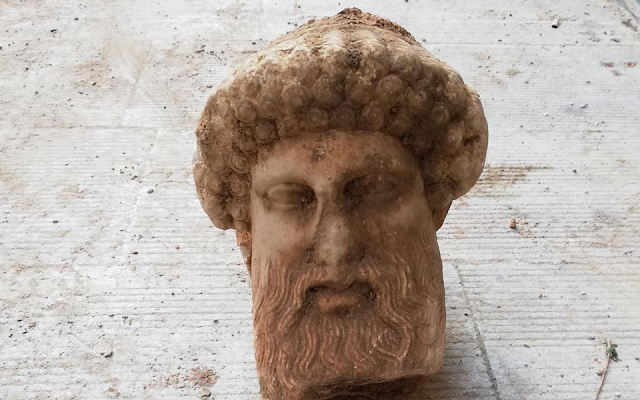 Read more »
Posted by Kali Ellada at 2:47 PM No comments: 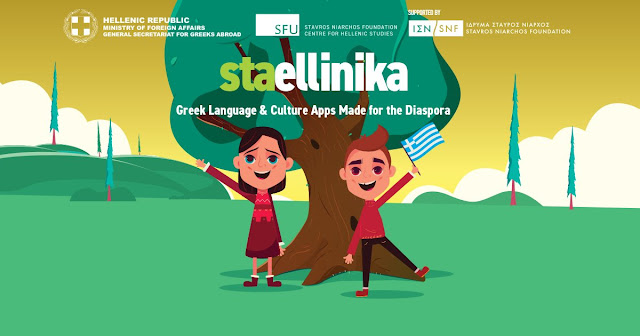 The Stavros Niarchos Foundation Centre for Hellenic Studies at Simon Fraser University and the General Secretariat for Public Diplomacy and Greeks Abroad of the Ministry of Foreign Affairs announced the full release of Staellinika, a new online platform which reconnects Greeks abroad with the homeland of their ancestors.

Now, Staellinika users will be able to experience the full version of the web application, which has been available for several months in pilot form, according to the online tool’s developers.

Since its inception, Staellinika, an online platform and suite of apps developed by the SNF New Media Lab at the SNF Centre for Hellenic Studies, has sought to provide individuals ranging from preschool-aged children to young adults with an innovative and engaging product designed to re-connect Greeks around the world with their heritage language and culture.

The platform’s creators have now realized their goal with the launch of a full course curriculum for beginner heritage learners in schools and for individuals at home. The platform can be used either as a stand-alone program to assist schools or to supplement their existing curriculum. It is offered for free thanks to very generous funding from the Stavros Niarchos Foundation (SNF). 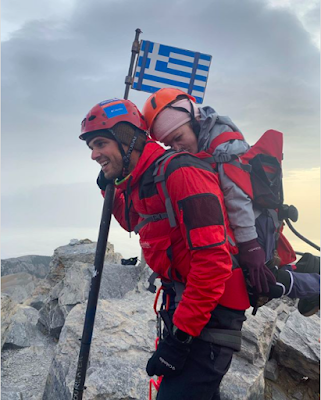 “There is nothing more real than the dream. 09:02 am We reached the top of Greece with Eleftheria and our team,” Marios Giannakou's Instagram post read in reference to Mount Olympus.

This was the post of the long distance athlete who informed about the successful completion of, what he described a few days ago, as the most important and beautiful race of his life. He conquered the top of Mount Olympus, carrying on his back, in a specially modified backpack, 22-year-old Eleftheria Tosiou, who has mobility problems.

“There is nothing more real than a dream,” writes the athlete from Drama in northern Greece, accompanying his post a photo of himself with the young biology student on his back, the Greek flag in his hand and a wide smile of satisfaction on the faces of both.

When Eleftheria met Marios through one of their common friends, she confided in him that she wants to ascend to Mount Olympus.

Without a second thought, the Drama athlete checked the diary, studied the meteorological forecasts, organized the appropriate support team and made his young friend’s dream come true.

Read more »
Posted by Kali Ellada at 1:04 PM No comments:

Maria Delivoria-Papadopoulos, scientist who saved thousands of infants, dies at 90 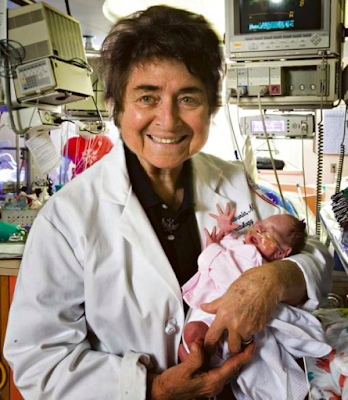 Maria Delivoria-Papadopoulos, an internationally known scientist in the field of neonatal medicine who helped save thousands of infants through her groundbreaking research, died Friday, Sept. 11, of endometrial cancer at the Hospital of the University of Pennsylvania.


During a 50-year career, Dr. Delivoria-Papadopoulos was a professor of pediatrics, physiology, and obstetrics/gynecology at Drexel University College of Medicine, and director of neonatal intensive care at St. Christopher’s Hospital for Children. Both are in Philadelphia.

She was regarded as the “mother of neonatology” and “a legend in the field," Greece’s Neonatal Society said in an online tribute.

Born in Athens, she was the daughter of Constantine and Kalliopi Delivoria. She earned a medical degree from Athens University.

She came to the United States in 1957 to pursue postdoctoral study in physiology at the University of Pennsylvania. She joined the faculty and created the neonatal unit at Penn, which she ran before leaving as professor emeritus in 2000.

She was on the Drexel faculty from 2000 to 2006, when she was given the Ralph Brenner Endowed Chair in Pediatrics at St. Christopher’s Hospital.

She was honored globally for her achievements and continued research in neonatal medicine throughout her life. Her most important contribution was taking the iron lung used to treat polio victims in the 1950s and adapting it to support the breathing of premature babies. Another was the use of magnetic resonance imaging to assess the infants' brains.

She was the first doctor to place an infant on a respirator to help with respiratory distress syndrome, her family said in a statement. She was also the first woman and doctor to demonstrate the effective use of mechanical ventilation to treat lung disease in premature infants, the family said. 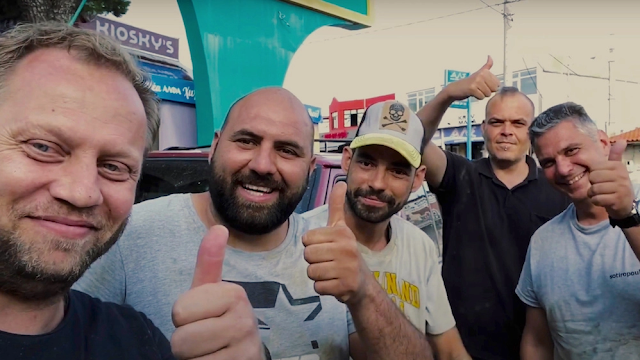 In early August, the Greek island of Evia was hit by a catastrophic flood that killed eight people and caused incalculable destruction. In the wake of the disaster, residents found their homes and possessions destroyed.

They were left to wonder how they could ever recover from this catastrophe. Now, a group of mechanics from Athens has volunteered to fix vehicles that were heavily damaged in the flood as soon as they saw the aftermath of the natural disaster.

The flooding was caused by the extraordinary amounts of rainfall that fell over a relatively short period of time. While the weather forecast had called for 63 mm (2.5 inches) of rain, Evia was deluged by 300 mm (11.8 inches) in just 8 hours, making the natural disaster one of the most devastating in the region’s history.

Tragically, eight people, including one infant, lost their lives in the terrible storm. Thousands of homes on Evia were flooded with water and mud, and many cars were swept away into the sea by torrents of water.

The amount of damage left by the flood is simply unimaginable. The most heavily-impacted regions on the island were Psachna, Politika, Bourtzi, Vasilikou and Lefkandi.

Upon seeing images of the destruction left in the wake of the flood, car aficionado Vasilis Papanikitas decided to go to Evia with his friends to help the residents there. “It started when I saw the cars in Bourtzi that were destroyed. People were saying that local mechanics didn’t believe that the cars could be repaired, and they should be discarded,” he explains.

Although Papanikitas is not a professional mechanic, but a cafe owner – his ‘Cafe Racer’ is a popular spot among car aficionados, in the Athenian suburb of Kifissia – he’s happy that he has now proved them wrong.

“I really like cars and I love repairing them. I couldn’t accept that the cars couldn’t be fixed. Nearly every car can be fixed,” he stated as he cleaned car parts that had been covered in mud during the flood.

Read more »
Posted by Kali Ellada at 4:07 PM No comments: 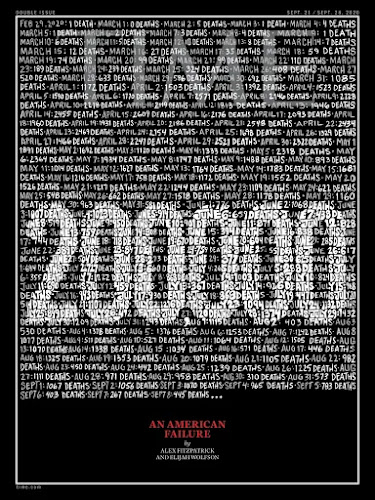 John Mavroudis’ cover for the latest issue of TIME magazine pays tribute to all 200,000 Americans who have lost their lives to COVID-19 this year.

Mavroudis’ concluding ellipses serve as a stark reminder of what will only continue during the pandemic in the absence of true leadership at the highest levels.

“I really hope this cover awakens the consciences of those who stand apathetically in the face of this catastrophe. Science and common sense are the answer to this crisis,” the Greek artist told local Greek media.

The good side of Greece radiates

Elona Angoli sewed 600 masks in Grevena. The Saabo family is doing the same in Trikala.

In every corner of Greece an "outbreak" of donations and volunteering and a strong mobilization in the battle against the coronavirus is manifesting.

Residents of Nea Filadelfeia donated more than 200 units of blood. In Agia Paraskevi, 114 units were collected. In Petrana and Kroko Kozanis, 15 and 21 units respectively.

A network of Emergency Seamstresses is created in 37 prefectures to arm the front line with 40,000 reusable masks. The volunteers of Covid-19 Response Greece design and manufacture more than 25,000 face shields. And they keep going.