Takes a village: ‘Greek Freak’ got many assists growing up 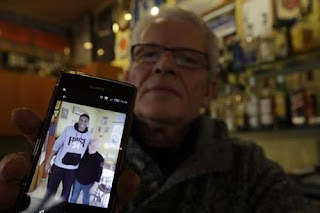 He was just a scrawny, hungry kid, the son of migrants from Nigeria, trying to survive in Sepolia, a modest Athens neighborhood.

The club coach who spotted 13-year-old Giannis Antetokounmpo and his brother kicking a soccer ball around a neighborhood field says the NBA All-Star grew up in constant fear of the police, and of being deported.

At that time, Antetokounmpo had only dabbled in basketball and was mostly interested in soccer. "He could not make a layup and he could not dribble," Spiros Velliniatis said.

But the teenager's character impressed Velliniatis, with a determination and toughness that showed through. "He was a champion before he was a basketball player," Velliniatis said.

Read more »
Posted by Kali Ellada at 2:30 AM No comments: