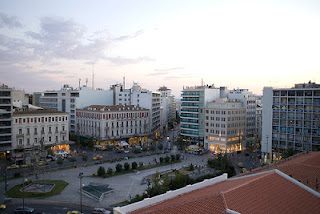 A plan to place tables and chairs around Omonia Square in the center of Athens -- currently shunned by many due to its sullied reputation for being a magnet for drug addicts and other undesirables -- appears to be nearing completion, barring a few bureaucratic issues.
During a meeting with business officials and representatives of the KIPOKA citizens group last week, City of Athens officials presented a number of proposals as well as maps of the designated areas.

All parties agreed that any interventions should not interfere with the square’s function and architecture. The plan as it stands is for chairs and tables to be placed on all the sidewalks apart from the stretch between the Pireos and Stadiou street exits.

The plan also envisages tables and seating in the center of the square, which is currently a desolate and generally unwelcoming place. Large 5x5 meter umbrellas will also be positioned here to provide shade, while on the sidewalks around the square, slightly smaller 4x4 meter versions will be installed.

Business owners had been in favor of installing shade cloth pergolas but the idea was rejected by City Hall. The municipal officials also said no to the idea of installing decks on which to place the tables and chairs.

Cafe owners are urged to keep a uniform look, chose one from up to three different colors for the seats and use small logos. “It should be made clear that this is a public space and not the extension of an existing business,” the municipal officials said.

KIPOKA’s Dimitris Nikolakopoulos said he was happy with the recent initiative. “The question of reclaiming Omonia Square is of vital importance in the bid to upgrade the center,” he said, adding that the decision to adorn the square with chairs and tables will attract people who currently only pass through it as a means of getting from one place to another but generally avoid the area otherwise.

Giorgos Stamatopoulos, one of the business owners who took part in the recent meeting, is also hopeful. “I believe that any bureaucratic issues that have emerged will soon be solved,” he said.

A similar experiment at Victoria Square, not far from Omonia, has met with relative success. “People like to come here now, and their presence puts off undesirable types,” said Eleni Papadopoulou, a local activist, adding that the initiative had come as a breath of fresh air for near-bankrupt businesses in the area. But such campaigns are no panacea. “When people go away in the evening, the problem elements return,” Papadopoulou said.


*Thanks Margaret S.  for the information!
Posted by Kali Ellada at 6:22 PM