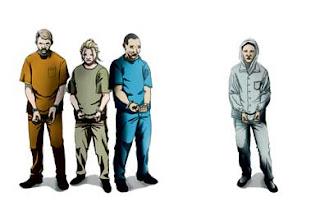 At a time when it often seems like the country is standing in front of a firing squad of rating agencies and creditors, there is much hope to be found in the fact that a team of 19 regular Greeks donated their time and hard work to create a video game for Amnesty International as part of its ongoing campaign to raise global awareness about human rights and push for the abolition of the death penalty around the world.

One sunny Saturday afternoon a couple of weeks ago, we met with the video game producer and lead writer Thanasis Triantafillou, executive producer Tasos Flambouras and lead programmer George Kazamias at the offices of the Hellenic Game Developers Association (HGDA), of which Triantafillou is a founding member and member of the board and Flambouras is president.

The HGDA, officially founded on December 2, 2009, after a year-and-half of jumping through bureaucratic hoops, now boasts several dozen members, mostly in Athens but also from other parts of the country, of whom about 100 pay an annual 20-euro membership fee.

This summer, 18 members -- whose “regular” jobs may be as dentists, lawyers, musicians or programmers -- teamed up for two months, working via e-mail, Skype and a handful of face-to-face meetings, to create a serious game on behalf of Amnesty International’s Greek branch on the abolition of the death penalty.

“A ‘serious game,’” according to Flambouras, “is one whose main purpose is not entertainment, but has to do with education, awareness or propaganda, business learning or medical assistance. For example, there are video games that help hyperactive children concentrate and games for the blind.”

Amnesty International, which was looking to broaden its campaign against the death penalty -- still practiced by 59 countries around the world -- heard of the work done by the HGDA through the friend of a friend.

“The subject is admittedly heavy for a video game,” said Flambouras, who conceived the script and organized the production of “Amnesty -- The Game.” “The hardest part was to find an idea that could become a game but not betray the issue. We had seen something developed in the past by a French company for Amnesty International -- it showed people being shot by an execution squad and the player had to stop the bullet with his hand. We though this gave the entirely wrong message -- the issue is not as simple as stopping the bullets. We needed an idea that worked for an issue that is so depressing and dire, but that was also fun to play. It also needed to put across Amnesty International’s message without portraying the inmates as angels -- they are scum and they’ve committed crimes, but there are other reasons why they shouldn’t be executed.”

The result is truly impressive, and, despite the long nights and the pressure of working against the clock, the members of the “Amnesty -- The Game” team are ready to try their hand again at similar projects for nongovernmental organizations and charities. Following the positive feedback “Amnesty -- The Game” has received, they have submitted it for competition at a video game expo in Lyon, France.


Playing the game on AmnestyGame.com

The gamer is invited to become an Amnesty International advocate/representative for a death row inmate in one of the six selected countries that still practice capital punishment: the United States, Iran, China, Belarus, Mongolia and Saudi Arabia. In the US, for example, the inmate is guilty of killing two police officers, in Belarus it’s a woman who killed children, and in Iran it’s a woman accused of committing adultery. Among the inmates, there is also someone who is innocent, though guilt is not a factor, as the issue is whether capital punishment is a human rights violation or not.
Within a given period of time (15 minutes represents a day in the life of the prisoner), the gamer must go through certain motions in order to save the inmate from the death penalty and have the practice abolished in the country.

The first step is opening an Amnesty International branch in the country. Then, the player can organize media campaigns, protests and petitions in order to influence the government’s stance on the issue while also getting the public on the campaign’s side by raising funds for awareness-raising activities.

Throughout the course of the game the player can view the actual actions organized by Amnesty International and sign its petitions through pop-ups.

As the game develops, a number of curve balls are thrown in. Some are negative -- such as a violent crime that makes the public shift its position on capital punishment -- and some are positive -- such as a celebrity joining the campaign.

Players can also gather points that give them more power in influencing the government by gathering “likes” on Facebook in favor of the campaign or by inviting “friends” to join in.
“Amnesty -- The Game” is currently produced in English and Greek.